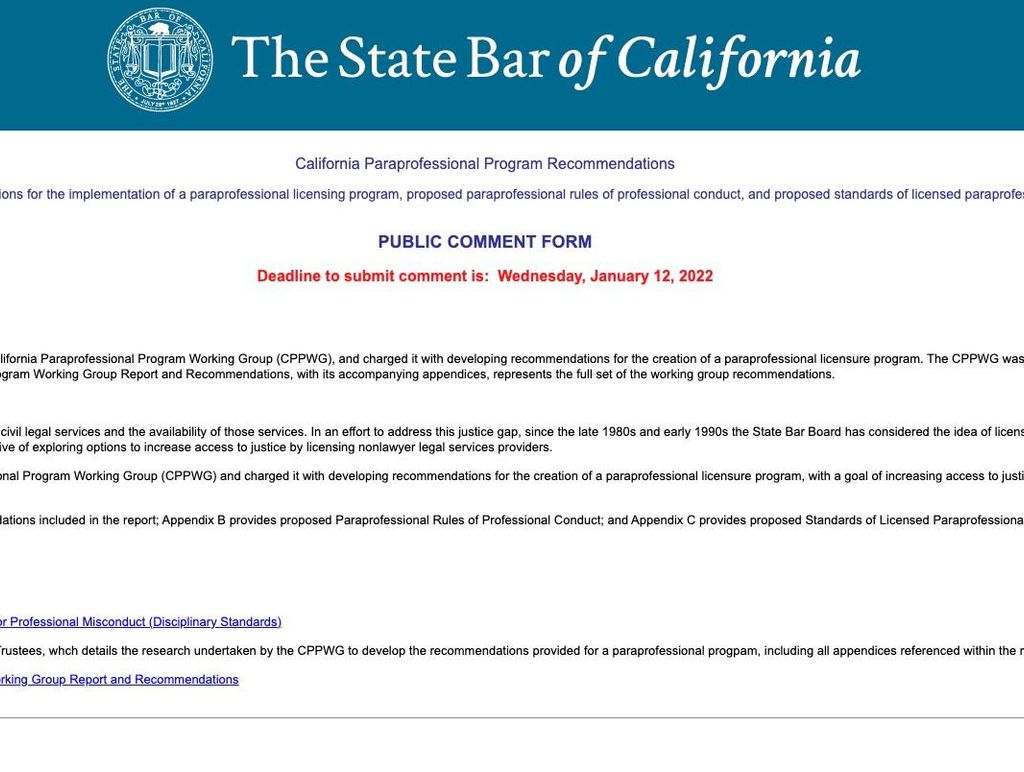 For the next 10 days, the California State Bar wants to know if you think non-lawyers should be allowed to practice law in California. To send your opinion to the State Bar, use the State Bar Public Comment Form. The comment deadline is January 12, 2022.

At its meeting in March 2020, the California State Bar Board of Trustees established the California Paraprofessional Program Working Group (CPPWG), and charged it with developing recommendations for the creation of a paraprofessional licensure program. The CPPWG was directed to balance the dual goals of ensuring public protection and increasing access to legal services.

Last September the CPPWG released its final report and recommendations for allowing non-lawyer paraprofessionals to practice law without the supervision of an attorney. The Bar is still seeking input from the public.

Who is in favor of allowing non-lawyers to practice law in California?

According to the Bar Association of San Francisco, this current proposal should it pass, could have a huge impact on providing legal resources to many Californians who are involved in a civil dispute but cannot afford legal representation. They state, “Many Californians cannot afford a lawyer so are deprived of essential legal resources when confronted with a legal problem. The affected parties are typically fighting for basic needs and rights, issues like fraud, health care, landlord/tenant disputes, discrimination, government benefits, adoption, and divorce. Imagine trying to navigate these waters with little to no help, while the opposing party has access to tools and resources that you cannot afford. The playing field is not level, and the chances of prevailing are slim to none.”

Who is against allowing non-lawyers to practice law in California?

One of the organizations against the proposal is the Consumer Attorneys Association of Los Angeles (CAALA). They state that among the report’s most controversial recommendations is a proposal to modify Rule of Professional Conduct 5.4 to allow paraprofessionals to own up to 49% of a law firm with attorneys and split fees with attorneys in the same firm. CAALA believes that this is the first step into allowing corporations to practice law which they vigorously oppose. You can read their detailed comments and analyses here.

According to CAALA, the CPPWG report is also recommending that paraprofessionals be allowed to practice and represent consumers in numerous areas of the law, including consumer debt and creditor harassment matters. The State Bar’s Executive Director has openly advocated that those who cannot pass the Bar Exam after 2-3 attempts are the target group to be licensed as paraprofessionals, allowed to practice law in courts with the exception only of jury trials, given the ability to own up to 49% of law firms, and given responsibility for client trust accounts. CAALA is gravely concerned that paraprofessional representation will result in inadequate and subpar representation, where the consumer will be left without appropriate remedies.

CAALA has worked closely with the Consumer Attorneys of California (CAOC) and supports CAOC’s written opposition to the paraprofessional proposal, which you can read here.

We will keep you posted.

California State Bar Certified Lawyer Referral Services, like Higher Legal [LRS#130], are designed and licensed to serve the community, protect legal consumers, and improve the quality and affordability of legal services to the public. We will continue to follow this story and will keep you informed of this potentially monumental change in how the law is practiced in California and who is allowed to practice.